In an age where an abundance of home entertainment turns many people into couch potatoes, movie theaters are eager to reach out to those willing to leave the house for entertainment. Figuring that sports fans were a good target - and that free fresh popcorn will butter anyone up - AMC Entertainment Inc. created redeemable keychains and distributed them at pro baseball and football events in their hometown of Kansas City, MO.

“Our decision to partner with the Royals and the Chiefs is about recognizing the synergies between the exhibition business and sports venues”, says Melanie Bell, VP of corporate communications. Guests who visit out-of-home sporting events like football games are also the same people that seek other forms of out-of-home entertainment.

Fans entering the stadium at a July 2007 Royals game and a December Chiefs game received the tags at the gate. For a limited time, they could show the tags on each visit to area AMC theaters and receive freshly popped popcorn for free. The first giveaway to 10,000 Royals fans went so well that AMC increased the number of tags to 60,000 for the Chiefs game.

“The keychain tags have been an extremely popular giveaway for us”, Bell says, “and we've received a lot of feedback from our theater associates about the favorable comments they hear from guests.”

The Kansas City Star reported that the Chiefs promotion spurred a 40% spike in attendance at a local theater. 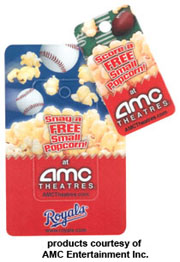