This summer, the Pennsylvania/New Jersey regional branch of the American Red Cross invited people to get their kicks on Route 56. Huh?

That's the name of the summer blood drive campaign just completed. During the campaign, all donors receiveed a Route 56-logoed Red Cross keytag, and the chance to win a year's supply of gas. When people came in to give blood, they got a keytag and a scratch-off game piece that gave them a chance to win T-shirts, visors, coffee mugs, or the grand prize of $2,000 in gas money.

The campaign was particularly important because it helped increase blood donations during the summer, a time when levels are typically become dangerously low. “This was our emergency summer campaign,” says Jennifer Lawser, account manager for blood services at the regional office. )“In the summertime, people are on vacation, kids are home from school, and nobody really thinks about donating blood.”

The fun auto-related theme was a big hit during a time of record-high gas prices. Donations increased more than 16% over the prior year. By the way, the free gas was donated in a nice public relations move by Lukoil Corp. “Most people thought it was a great incentive. Others felt it wasn't the reason they donated, but it was nice to walk away with a token of appreciation,” Lawser says.“Either way, we won.” 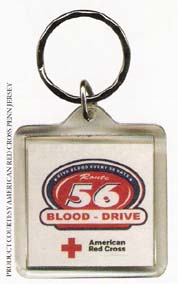