Earlier this month we were talking about what a powerful promotion a bobblehead day could be for major league baseball teams. They've been proven to drive sales in a big way. The NY Yankees planned one for Sept. 24, 2013, honoring retiring pitcher Mariano Rivera. But everything turned sour for thousands of New York Yankees' fans who waited for hours when the figurines arrived late. “Although a perfect storm of circumstances beyond our control led to the delay in the distribution of last night's promotional item, the fact remains that our fans were inconvenienced,” said Yankees' COO Lonn Trost, in a statement. “It matters little why – only that they were.” The New York Daily News described the scene as chaotic.

The Yankees were scheduled to give away Mariano Rivera bobbleheads to the first 18,000 fans in attendance at Tuesday's game at Yankee Stadium. But the bobbleheads were delayed twice, including once when a truck broke down in New Jersey on the day of the game. The team postponed the opening of the stadium gates by an hour as fans lined up to enter. As the delays continued, the team printed up vouchers for fans to claim the bobblehead during and after the game. As a result, thousands of fans missed much of the game, instead waiting in long lines to get the bobbleheads once they had arrived after 6:00 p.m. "It was total chaos, people were standing on line and missing the game. They were yelling and screaming,” a police source told the New York Post.

To make up for the snafu, the Yankees apologized to the fans and offered a complimentary 2014 regular season ticket to all ticket holders from Tuesday's game. Deborah Tymon, the Yankees' senior VP of marketing, told the New York Daily News the team typically receives promotional shipments on the day of the game because of storage restrictions at the stadium. The company handling the promotion for the Yankees has undoubtedly learned some lessons about contingency planning from this episode. 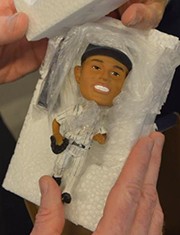