The St. Louis Regional Clean Air Partnership was formed in 1995 to raise awareness of air-quality issues and to encourage people in the area to help reduce air pollution. Each summer - typically the worst season for air quality - the Partnership issues forecast alerts via e-mail. This year, for the first time, the group offered a promotional giveaway to drum up interest: an insulated lunch bag filled with imprinted goodies.

“We sent out a press release to the media letting people know that if they went to the Web site, which is www.cleanair-stlouis.com, there's a link where they can sign up to get the daily air-quality forecast sent to them via e-mail,” says Shelene Treptow of The Hauser Group, the PR firm for the campaign. “For those who signed up, we would send them a free lunchbox stuffed with a variety of different clean-air-oriented materials.” Treptow adds that the lunch bag was chosen for a good reason:“The Clean Air Partnership urges people to brownbag lunch as opposed to driving during their lunch hour to cut back on emissions. So the lunchbox keys off of that kind of clean-air tip they like to stress.”

The bag is imprinted with a clean-air message and filled with brochures and several promotional products: a stadium cup, pencils, a pen and a notepad, all imprinted with either the Partnership logo or that of the American Lung Association. The press release went out to the local media in July, about halfway through the forecasting season but at the start of the worst air-quality days. “When it hit in the paper,” Treptow says, “we were inundated with calls and e-mails about it. I don't think we anticipated doing all that many, but it went really well.” 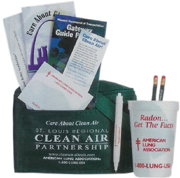