Clothing Company Wrists It All for Earth's Climate

Canadian clothing company Roots wouldn't live up to it's name if it wasn't committed to Earth's wellbeing. “Dating back to the inception of Roots, the company has always been active in various ecological initiatives and supportive of different environmental organizations in Canada and the U.S.,” says Robert Sarner, director of communication and public affairs.

Two years ago, Roots launched a campaign tied to An Inconvenient Truth, the film accounting former Vice President Al Gore's campaign to fight global warming. The company teamed with one of the film's producers, Laurie David, to raise funds to promote awareness of global warming and how to combat it.

For the program, Roots created a bracelet embroidered with “STOP GLOBAL WARMING.” The company took care to make the product in an environmentally responsible way, opting to use scrap leather instead of petroleum-based plastic or synthetic rubber.

“We make the bracelets at our factory in Toronto from scrap leather that was left over from the making of our usual leather goods,” Sarner says. “For all our products, we use only cowhides from environmentally friendly tanneries. This is a byproduct of cows that are first and primarily used for the making of food supplies.”

Customers can buy the bracelet for $5 (U.S. or Canadian) at Roots stores or online at usa.roots.com or canada.roots.com, and the company donates 100% of net proceeds. “To date, sales have raised more than $100,000 for the U.S.-based Stop Global Warming Fund,” Sarner says. “They have been particularly popular on our Web site and have generated considerable coverage in the media.” 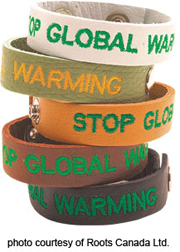