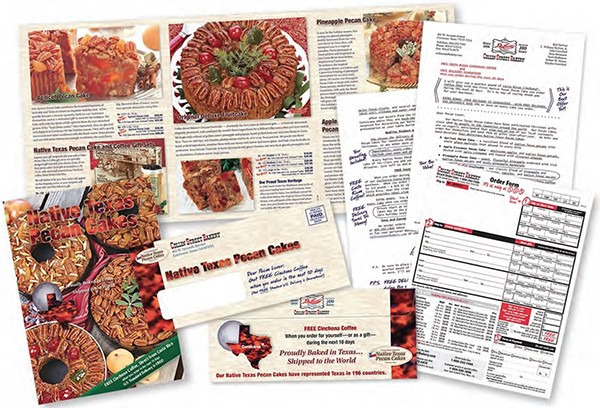 Direct Mail Marketing That Gets Attention

Collin Street Bakery, a highly respected Texas-based bakery, had an image problem. It sold fruitcake in a world that makes fun of fruitcakes.

“Collin Street Bakery has been shipping to 200 countries around the world for generations,” direct mail consultant Gary Hennerberg says. “It’s a very storied company with a storied product. The challenge was not with current customers returning, because they have a remarkably high repurchase rate, but engaging those who had never tried their product before.” The problem was that the target audience saw the fruitcake as, well, fruitcake. “We’ve all heard the fruitcake jokes over the years,” Hennerberg says.

Collin Street Bakery had to reposition the product in the eyes of customers. But how?

Focus groups, that's how. Four groups of people were gathered in two locations, Dallas and Chicago, and asked to come in and taste the product. In all four groups, the response was the same. “Wow! This is really tasty. You shouldn’t call it fruitcake.”

Initially, that was unthinkable for the bakery, which had sold the product as fruitcake for generations. But some research led to a true differentiator for the product. The cake was full of pecans, but not the commercially grown kind used in most bakery products. It used native Texas pecans, which are smaller and more flavorful. These pecans trees are only found along some rivers and streams in Texas and the South. They require certain soil conditions and rainfall.

Collin Street Bakery renamed the product Native Texas Pecan Cake. To go with the new name, a new, colorful outer envelope was designed with “show stoppers,” or elements that make people stop and look longer than they otherwise would. This envelope uses seven of them:

If every show stopper is worth one-half to one second, instead of a plain outer envelope that someone throws in the trash without giving a second thought, the engagement is increased so they are sticking around for three or four seconds—maybe even five or six seconds. Inside the envelope, the reframing and storytelling continued. The direct mail letter talked about how native pecans have a better flavor than commercial pecans and how the natural oils found offer unsurpassed taste and outstanding nutritional value. It described how the native pecan trees are found locally, and how they were planted by Mother Nature, pioneers and settlers as long ago as the Civil War.

It was masterful storytelling. This, along with a powerful new envelope design, increased response rates by 60 percent. Really, SIXTY percent! It took a lot of different changes to get to that level, starting with the focus groups, and continuing through lots of testing of different designs. If you’d like to increase your direct mail response, give us a call.

APTCO designs direct mail of many varieties, from envelopes to self contained pieces, like the Intelimailer.