Sports fans will do anything for their teams, right?

Marketers tested this theory during last college basketball season by pitting three Raleigh-Durham, North Carolina, area colleges against each other in a six-month-long coffee-drinking contest. More important than beans, roasts or flavorings, however, were the cups contestants chose for their java.

Each 22-ounce, single-use paper cup of Bean Street-branded coffee at approximately 50 area Kangaroo Express convenience stores was co-imprinted with the Kangaroo Express logo and one of three school mascots. Coffee drinkers chose the cup featuring their favorite school—Duke University, in Durham; North Carolina State University, in Raleigh; or the University of North Carolina, in Chapel Hill—and the purchase earned one point per cup for the chosen school. 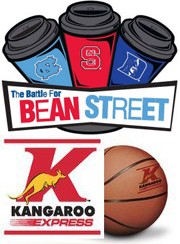 The school with the most points at season’s end won the Battle for Bean Street and a $20,000 donation to the charity of its choice from Kangaroo Express and its parent company, The Pantry, Inc. The promotion was a triple win for the schools, the charities and The Pantry Inc., which sought to advertise the launch of its exclusive Bean Street Coffee brand. The three North Carolina universities in the contest are all located within a 20 mile radius, so it’s not surprising that school allegiances run deep.

“We knew we could get people to sample our coffee if we used these borrowed interests of the schools and great coffee,” says Jeremy Skiver, who coordinated the campaign’s digital and traditional elements. He says the target demographic for Bean Street Coffee ranges from college students and coffee lovers to college basketball fans and commuters. “Once we got them to come in and sample, we knew we could get them to come back because the coffee is that good,” Skiver says.

The challenge, Skiver says, was appealing to such a wide audience. The campaign took advantage of both traditional and digital media, deploying tv and radio spots, in-store advertising, on-campus posters and Facebook and Twitter pages. The campaign also had a website, which displayed up-to-the-minute stats on each store’s cup sales.

“People would say, ‘NC State has taken over one of our UNC stores. We’ve got to get in there and take back our store!’” says Skiver.

Cups sales data were collected at the point-of-sale by scanning a barcode on each cup. This information was automatically sent to the contest’s micro site on kangarooexpress.com. Skiver says ROI was easy to track because “people who were going to do the 22-ounce were doing it for the cup. So that was going to give us a really good gauge.” By comparison, a size “Venti” for hot drinks at Starbucks holds 20 ounces. During the six-month promotion, participating Kangaroo Express stores sold more than 120,000 cups decorated with logos from colleges in the Raleigh-Durham area. “People were buying the cups, using the cups and checking the micro site daily,” Skiver says.

The most difficult part of the project was that only one team could win. “The charity aspect was an important part of the project,” Skiver says. Plus, the possibility of a donation in their name went a long way in getting the three schools involved. “It was close. In the end, Kangaroo Express donated to all the charities,” he says.

Once April came and the contest drew to a close, the University of North Carolina, in Chapel Hill, had the highest cup sales. Kangaroo Express donated $20,000 to the winner’s charity—U.N.C. Build a Block, a student organization that works with Habitat for Humanity. The runner-ups each received $5,000 for their charities—the Kay Yow Cancer Fund for North Carolina State, and the Duke Comprehensive Cancer Center for Duke.

The promotion fit well with the area’s intense college basketball fandom and, for the first time, brought all three schools together. “These schools and their mascots have never participated in a promotion together, and they are literally on top of each other,” Skiver explains. “When we did our in-store posters, it was the first time they’d ever been photographed together for a promotion.” Those involved were so pleased that the Battle for Bean Street, part two, is in the works. “We’re looking forward to kicking off season two,” Skiver says.

It's never too late. We have lots of great holiday gifts that are available on a rush.

“There are two rules for success. 1) Never tell everything you know.”