It's All About the Results

Regular readers of this newsletter know how we feel about the word giveaway. We believe in promotions but hate giveaways. Though a large portion of our business is in providing branded promotional products (along with printing everything from business forms to catalogs), we wish companies would quit simply giving stuff away. Why? Because promotional products can do so much more. Here are two examples of promotional campaigns that delivered results.

A new survey by The Wall Street Journal shows that Major League Baseball (MLB) teams that gave away bobblehead products to fans this year increased their attendance by an average of 4.8% on the days of the promotions. In fact, teams like the Seattle Mariners and the Cincinnati Reds increased their attendance for bobblehead giveaway days by more than 40%. (Yes, they did use that dreaded word, but were clearly thinking beyond it.) Have you checked the price of a professional sports ticket lately? Add to that the average amount spent on food, drinks, and souvenirs inside the gates, and it's easy to see the value to management of each additional attendee.

The Journal matched the announced attendance for games in which bobblehead products were given away with games without any promotions that were held on the same day of the week (a regular Saturday afternoon game, for example, compared to a Saturday game that contained a bobblehead promotion). In doing so, the study found that professional baseball teams grew their attendance by nearly 5% on bobblehead days.

The bobblehead with the biggest impact this season? Former Seattle Mariners’ outfielder Ken Griffey Jr. The Mariners saw 46,027 fans line up to get their hands on one of 20,000 Griffey dolls on August 10, an increase of almost 50% from the typical Saturday at Safeco Field. Obviously, nostalgia was a big factor leading this promotion to outpace those with current players.

Results don't always have to be about increased sales. Promotional products can be the perfect vehicle to deliver a message about a worthy cause. A good example is the dangers of texting and driving. This dangerous habit has cost over a million lives a year recently. While awareness is increasing with the help of media coverage (not to mention laws in many localities), the growth of the smartphone market means this will be an ongoing challenge.

Many organizations have participated in campaigns involving a spinoff of the popular silicone bracelets. These colorful items are often imprinted with messages such as “no txting” or “stop2txt”. Of course, they are targeted for the thumb since most texters use the thumb more than the other fingers for typing on a cell phone.

The organization “dosomething.org” has championed many worthy causes that are of interest to young people. A recently concluded campaign used a similar item, thumb socks, which were just silly and outrageous enough to be a hit. Participants were invited to submit photos of themselves wearing them behind the wheel. Chief marketing office Naomi Hirabayashi explained, “We're giving young people the tools to start a conversation around safe driving with their friends in a fun and unique way.”

So before you just choose a product to give away at an event, think beyond the product to what you want to accomplish. The right product, message, and promotion can be so much more than a giveaway. 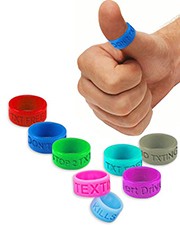 Of all advertising methods, promotional products can have some of the most measurable results.

“Creativity is intelligence having fun.”

. . . and many more than you could count. Really, we couldn't make this stuff up. Check out this listing.