Let's Go To the Movies

Everything from plastic fangs promoting the latest vampire flick to whoopee cushions decorated with the title of an upcoming slapstick comedy has been used in product advertising for motion pictures. Major Hollywood studios, including Warner Bros., Universal Studios and Walt Disney Pictures, each typically spent between $300 and $600 million on advertising, Adweek reports. For independent films not backed by studios with deep pockets, 10-20 percent of a film’s total budget is typically earmarked for marketing and distribution expenses.

Advertising campaigns for movies often serve dual purposes: informing moviegoers about the project and generating enough attention to validate its cinematic worth. Promotional products help with this by building buzz among fans, impressing members of the media and attracting attention at film festivals and screenings.

“Audiences also enjoy souvenirs they can bring home as a reminder of the film or to give to someone to help them remember to watch the movie,” explains Ryan Davis, a principal at Smarthouse Creative who promotes the work of her entertainment-industry clients. “They can also be badges of honor, proving you were among the select few at a premiere.” 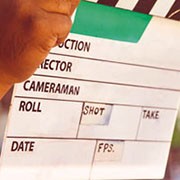 While it seems like marketing and advertising a film is a concern best addressed post-production, the sooner marketing plans are made the better. The bulk of movie marketing is done just before the release date. Planning ahead allows you to take advantage of volume price breaks and avoid rush orders.

Popular items include posters, flyers, t-shirts, buttons, magnets, reusable bags, hats and more. These are often used as crowd-funding perks and as prizes in social media contests. Promotional products can also stand in as thank-you’s for production crews and others who helped out on the project.

Even when overall quantities are large, marketers can get extra impact by making many smaller runs so you have ‘limited edition’ items, increasing demand and attention. One of the benefits of promotional products as an advertising medium is the ability to limit your target audience. While filmmakers may think their film would appeal to everyone, budgets may not all them to market to everyone. Promotional items are great for targeting.

Here are a few examples of how major blockbusters have improved their marketing with promotional products:

Even if you're not a movie studio, you can learn from their experiences in using promotional products as targeted advertising.

“A goal is a dream with a deadline.”