KPMG, an audit, tax and advisory services firm, recently developed a brand-boosting marketing campaign. They developed a tagline – “The Right Team” – and recognized that it was a natural segue to a sports marketing effort, deciding to link it with golf. “It became an opportunity to create impact and brand awareness through the game,” they said.

KPMG developed an item to market to golf fans, designing a navy blue imprinted hat and establishing a website at www.golf-kpmg.com. They then added a charitable aspect with a link to their Family For Literacy program (KFFL), established in 2008. They connected the marketing effort with both KFFL and First Book, a nonprofit that supports childhood literacy through book donations. They named it Blue for Books. For each hat sold, Blue for Books donates three books to needy kids. 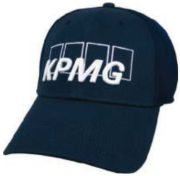 As the program developed, pro golfer Phil Mickelson lent his support to the effort and began to wear the hat, which was dubbed “Phil’s Blue Hat,” at tournaments and media events. It quickly became a popular item among fans. Now, for every piece sold, Blue for Books donates three brand-new books to kids in need. In the past two years, they’ve sold over 10,000 hats and donated 30,000 books.

KPMG has also signed golfer Stacy Lewis, who wears her own hat style that’s now for sale on the website. Lewis says, “I am excited to support KPMG's Family for Literacy efforts by wearing my new Blue Hat and I hope my fans will do the same. I think every professional athlete is put in a position to help others and giving kids a better shot at success in life through literacy is something that I’m passionate about.”

This marketing campaign is another example showing that, sometimes, the best ideas combine both profit motive and charitable efforts. Look outside the usual realm and you will find opportunies for a win-win. Social impact and the benefits of being “likeable” for the good work you should be doing have no price tag.

You don't need a celebrity to add a charitable component to your marketing.