Magazines, like newspapers, have faced a challenging market the past few years. Many have been forced to close as both subscriptions and advertising revenue have declined, while printing costs have remained relatively static. Much of the reason for this is completely independent of the general economic downturn; rather, it results from changes in technology and lifestyle. The industry has responded with new approaches to the market, and achieved some positive results. On July 13, the media blog Gawker declared, “Magazines Are Back! (Temporarily),” pointing to the recent, bullish numbers from Publishers Information Bureau. The organization reported that magazines had enjoyed year-over-year growth in ad pages and revenue during the second quarter of 2010, which had not happened since the fourth quarter of 2007. Revenue in the second quarter was up 5.7% over the same period in 2009, to $5.2 billion, while ad pages gained 0.8%, to 43,427.

Adding to this good news was MediaFinder's announcement that, calculating all magazine closures and new title launches, there had actually been a net gain of three magazines in the first six months of 2010 – vs. a net loss of 92 titles in the same period of 2009. While there may not yet be big changes in how much is being spent on marketing, there have been more qualitative shifts in magazine marketing. Specifically, they are increasingly unlikely to be called “magazines” at all.

“If there's one overall theme, it's a shift from promoting an individual magazine offering to selling the whole brand,” says Josh Gordon, president of Smarter Media Sales, who also runs www.adsalesblog.com. As competition has required print magazines to branch out into websites, digital editions, podcasts, live events and more, the brand extensions have also opened up the advertising opportunities. “The portfolio that salespeople have to sell has gotten very diverse with new content and online,” he says.

With this new diversity, magazine brands may also find it easier to make good use of promotional products. To get new subscribers, The New Yorker has been offering a free branded umbrella to those who commit for one year. Wired has been giving subscribers branded portable speakers with an iPod dock. Both Glamour and Vogue offer exclusive handbags (Vogue's is a stylish black, Glamour's a more colorful light red), while GQ offers a men's black messenger bag, branded with the magazine's logo. Online subscriptions also lend themselves to effective use of online premiums, such as digital downloads including music and ringtones.

Special added-value books are popular, as well. Runner's World offers a free “Runner's Training Log,” while Architectural Digest gives away a “Celebrity Homes” and a “Before & After” booklet. Naturally, these rewards are custom branded. All these products illustrate the flexibility and marketing potential of today's successful magazine brands. Yet they also point to the reality that while the media landscape shifts to ever-greater immediacy and speed, magazines continue to rely chiefly on the long-term loyalty of subscribers.

“Publishers are always thinking about what will happen a year from now – whether they give away a digital edition, a coffee mug or a magazine, it's to drive long-term subscriptions,” says Gordon. “All people doing promotions could take a page from publishers. Instead of viewing promotions as an ongoing series of desperate acts, they have a forced discipline, always having to look at the next six months, 12 months.” That's sound advice, and certainly a message we often repeat to our clients. Never just look for something new to give away. Formulate your marketing objective, then craft the promotion that will lead you there. 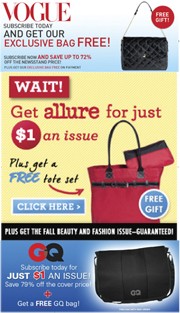