Nonprofit organizations face many challenges. Their marketing budgets are generally much smaller than those of major corporations. They have to depend on donations rather than sales to generate operating income.

Motley Zoo Animal Rescue is known as the “Rock‘n’Roll Rescue” thanks to focused branding centered on a music industry theme. The nonprofit’s name is a re-worked version of rock band “Mötley Crüe,” and the theme is carried throughout the animal rescue’s many educational and outreach services. “We don’t have a facility, so we do weekly events in the community and rely heavily on marketing and branding to draw people in,” says Motley Zoo (www.motleyzoo.org) executive Jme Thomas.

The agency sponsors weekly adoption events at partnering pet stores and brings a rack of Motley Zoo-branded designs to sell. Foster families care for animals in their home until the pet is adopted. The agency’s animals are dubbed “roadies” when they are in Motley’s care and seeking homes. Once adopted, the pets are called “rock stars.” 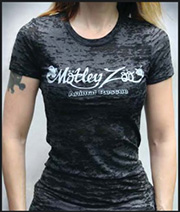 “Clever branding and merchandise are critical to helping us spread the message of rescue, adoption and spay/neuter advocacy,” says Thomas. Motley Zoo uses bold designs, such as zebra stripes, for event setups. Its online store www.motleyzoo.com offers rocker-themed T-shirts and other merchandise, with all of the proceeds going directly to help the animals. “We’re all volunteers, so every penny we bring in, any way we bring it in, is for the animals,” says Thomas. Motley Zoo is currently renovating a facility space that will include a rescue office and pet showroom, as well as dog training events and classes. “We will also be hosting our year-round fundraising event, ‘Rock Star Treatment Dog Daycare,’” she says.

The new facility and services will generate revenue to allow Motley Zoo to continue to serve the animals it’s adopted out, as well as bring in more support and interest from the community and grow the rescue itself, she adds. Its fans are so loyal that they banded together and generated enough votes for the rescue to win a brand new Toyota in the automaker’s “100 Cars for Good” challenge.

Motley Zoo was the only animal welfare organization to be one of the 500 finalists and it generated enough votes to win the contest by more than 40%. In addition, Seattle television station King-5 awarded Motley Zoo “Best Local Charity of Western Washington” in 2013. “People really respond well to what we’re doing. We’re very proud of our branding,” she says. “It has done wonders for us.”

In addition to our focus on promotional marketing, APTCO is a full service provider of printing of every description.

“The human brain starts working the moment you are born and never stops, until you stand up to speak in public.”