The Cleveland Museum of natural history is a world-class destination for visitors and researchers. For nearly a century it has served as an outstanding resource for public education and environmental conservation. Membership dollars support the Museum's collections, its curators and their research, and educational programs that benefit one-quarter million visitors per year.

The museum had been seeing a decline in membership dollars in recent years and needed to reverse the trend. A clear primary goal was established: Sign up 800 new members. Secondary goals included (1) promote a new traveling exhibit, and (2) entice people to visit.

Previous Direct Mail membership campaigns had yielded a fairly routine 1% average return. This year a different tactic was taken. Direct Mail would still be used, but the call to action would be made more fun, more attention-grabbing and more “irrisistible”. The Museum opted to run an instant prize promotion using “Conceal & Reveal” game cards. 50,000 total pieces were mailed. Each envelope included an application and a custom scratch-off. The scratch-off incorporated six dinosaur “eggs” to be scratched and was tied to the chance to win great prizes from free tickets, all the way up to a party at the Museum for a winner and up to 100 friends.

Results? The campaign attracted 500 new members in the first ten days and more than 1000 new members by roughly mid-way through the promotion. The Museum's Director of Membership said, “The results are the best we have ever gotten from a campaign.” 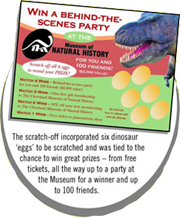 “Education is what remains after one has forgotten everything he learned in school.”

Customer: I have a huge problem. A friend has put a screensaver on my computer, but every time I move the mouse, it disappears!