Scaring Up DVD Sales With A BBQ Promo

Every week dozens of movie titles are released for the home-viewing market on DVD. So, a non-blockbuster new release has to get creative in its marketing efforts to stand out from the crowd.

When Universal Home Video was ready to release the horror film Seed of Chucky on DVD, it knew it had a ready-made audience in fans of the Chucky (a kids’ doll gone way wrong) series, but it wanted to capture more attention. They decided it was time for some promotional product help.

Universal wanted something it could send to major broadcast journalists, in the hope of generating additional coverage for the movie. The release date for Seed of Chucky was close to Fathers’ Day. And since the movie was about Chucky’s offspring, they thought it would be fun to pursue a Father’s Day theme.

The end result centered around something a lot of dads do on Fathers’ Day — barbecue. Recipients were sent a Seed of Chucky barbecue kit consisting of a cloth apron imprinted with the film's name, DVD release date, the words “Who's your daddy?” and two small “bloody” handprints. It was accompanied by a chef's hat, a bottle of custom-labeled “Chucky” barbecue sauce, and a full-sized soft-plastic cleaver — one of the character's weapons of choice. That was a little over the top, but it really made the point of the kind of film it was.

The kits were mailed to 100 major journalists nationwide. For such a niche movie, a little extra coverage means a lot. Chucky got media coverage in several new venues as a result of the mailing. 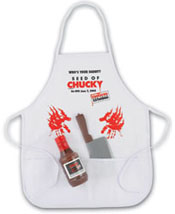