An unusual product requires an unusual promotion. Culturelle, a company that makes dietary supplements that aid in digestive health and immune-system functioning, was looking to promote its brand in a quirky way. The company’s products are “probiotics” – healthy bacteria that aid digestion – which might confuse the average consumer who associates bacteria with disease or things unhealthy.

With this in mind, Culturelle devised the “I Love Bacteria” campaign. The company gave away T-shirts imprinted with the classic “I ♥” icon to curious customers who saw an ad for it. After an extremely successful test-run of the campaign, Culturelle widened the promotion, tying it into its print and television advertising campaigns, both of which featured someone wearing the “I ♥ Bacteria”; T-shirt.

The quirky promotion met every one of the company’s goals. “We grew our consumer database substantially, increased our out-of-home branding since our logo was on the back of the shirts, and even used the shirts as a giveaway that bloggers used to kick-start a program which educated consumers about Culturelle and probiotics,” says Dave O’Brien, brand manager for Culturelle.

In fact, the company got much more than it bargained for. Using social media as well as more traditional outlets, Culturelle ended up with more than 100,000 requests in the first week alone. The T-shirt premium has been put on hold for awhile due to the speed with which they were snapped up. Currently the brand&’s leadership is planning new ways to get the “I Love Bacteria” message out.

“People like wearing shirts that cause others to take a second look, and this shirt definitely accomplishes that,” says O’Brien. “The shirt also acts as a great way to connect consumers with the brand and make it a part of their life” 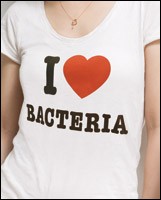