Loctite Sumo Glue is a new, heavy-duty, universal glue with a name that emphasizes its bonding strength. Realizing the the sumo wrestler image is a powerful one, maker Hekel Consumer Adhesives Inc decided to include a sumo-themed promotional product in the press kits they recently created for the launch of the glue.

“In order to communicate the strength factor associated with the product, we wanted to personify the product as much as possible,” says spokesperson Jennifer Kramer. “We were able to order sumo stress-reliever squeezies to which our Loctite logo could be applied.”

The launch coincided with the 2006 National Hardware Show in Las Vegas last summer, so before the show, about 70 of the kits were sent to members of the media who were likely to attend. A cover letter asked the recipients to make an appointment to talk to reps during the show and to stop by the booth. “The feedback was overwhelming,” Kramer says, “and as a result of the media relations efforts, we were able to meet with 58 media contacts and introduce them to all of Hankel's products.” 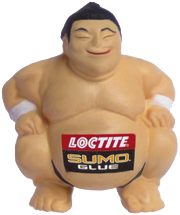 In fact, the mailing worked so well that Henkel followed up by sending out 100 more kits to members of the press who hadn't gone to the show. “The sumo reminders were mentioned in almost every conversation we had with editors” Kramer says, “and served as the perfect reminder - not only to stop by our booth but that Sumo Glue was certainly the contender that was out-muscling the competition”

The branding began when the product name was selected, but really came to life by choosing a mascot that gave the promotion — and the product — a personality. If you want a campaign to be remembered, a mascot is one way to do it.