Hot-tub dealer Paradise Spas was looking for a way to build traffic for their booth at an upcoming home show. They wanted to use an affordable gift, but had several stipulations for it: Ideally, the item should be fun, grab attention, tie in with their products and ­ most important ­ emphasize their new “stress-free” maintenance program.

A wide array of stress-reliever products were considered, and the spa company liked the retro idea of toy springs. Many people remember the Slinky from a generation ago, and it has a universal appeal that spans all age groups. Specifically, they chose a 1-1/4" mini toy spring in metallic colors. In an abstract way, the spring has a look reminiscent of a whirlpool — which tied in with the spas.

Paradise Spas distributed them to attendees who stopped at their booth and listened to their sales presentation. They liked the fact that the exhibitor distributed something kid-friendly because most people attending the home show were families with children.

The toy helped keep kids occupied while their parents looked over spas and had questions answered by the booth staff. It also drew in other show-goers. Their objective was to increase their booth traffic, and it certainly did that. When other attendees and kids saw the springs, they all wanted one, so it drove traffic to their booth.

Need something special that ties in with your promotional theme? Call us! 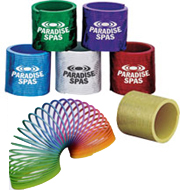