Who Wants To Be A Minion-aire?

>Universal Pictures dug deep to promote this past summer's animated Minions movie. The marketing leading up to, and during the release of Minions was an absolute blitz. The creatures were everywhere, from McDonald's to IHOP to Best Buy. It seemed that wherever you turned, there was yellow.

Speaking of yellow, Pantone, the company that standardizes colors for the graphics and design industries, established an official new color, Minion Yellow. It’s been three years since they added a color to their palette of thousands of shades. That really speaks to the power of these accidental stars who began as mere sidekicks in the film Despicable Me. And in case you think Pantone isn't serious about it, check out this official statement: “Just as the sun’s rays enliven us, Pantone Minion Yellow is a color that heightens awareness and creates clarity, lighting the way to the intelligence, originality and the resourcefulness of an open mind,” said Leatrice Eiseman, executive director of the Pantone Color Institute. “This is the color of hope, joy and optimism.”

Animated characters turned into promotional products are nothing new for McDonald’s (think Happy Meal toys), but you’ve also seen these goggled faces on Tic-Tacs, Twinkies, Amazon boxes and bananas. Of course, it didn’t always go well. A giant balloon on display at a fair in Ireland got loose and caused a traffic jam.

The Minions have been a licensing bonanza for Universal; a wide range of products at all price points has raked in $2.5 billion in retail sales since the Minions were first introduced in 2011. Universal executives say this campaign is the most expensive one they’ve launched for any studio project, but the efforts paid off. The movie’s opening weekend in the U.S. scored $115 million in box office sales, the second-highest grossing opening weekend for an animated film. Worldwide, the debut numbers reached close to $400 million.

Is it any wonder that promotional products played a big part in the marketing? As we've written before, these keepsakes inform moviegoers and build buzz about films. Read about more successful campaigns here. 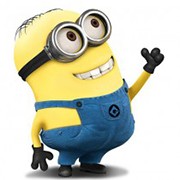 APTCO works with a lot of small businesses, but applies the lessons from the largest.

“The secret of making dreams come true can be summarized in four C's. They are Curiosity, Confidence, Courage, and Constancy; and the greatest of these is Confidence.”