Video Game Kicks It Into Gear

Earlier this year, select reporters, bloggers and key “influencers” received a mysterious box in the mail. In it was a single metal cog engraved with a series of letters and numerals as well as the words “Property of the Coalition of Ordered Government.”

A slip of paper said “If found, visit www.gearsofwar.com/lastday and enter the code CSID#.” An image of a skull within the cog also adorned the scrap of paper. Once at the site, viewers were told the story of the world’s end from the point of view of a robot. If the code was entered, more of the story was revealed.

This was Microsoft Games Studios’ way of introducing its new “Gears of War 2” game title. One thousand metal cogs were sent out to promote the title, which was released on November 7, 2008. One blogger who worked for the postal service received a message to check a post office box in Seattle.Within it he found a beaten up old book with the cog hidden inside.

Such creativityhelped fuel buzz for the burgeoning gaming franchise. “From the initial concept we knew that seeding elements into the wild would energize hardcore gamers,” says John Jakubowksi, creative director at AKQA, San Francisco, which helped create the effort.

Because of the “inherent nature of gamers, the campaign was spun off into spontaneously created blogs and communities digging deeper and deeper into the mysteries of ‘Gears of War 2.’ They found that cogs are hidden all over the world,” Jakubowski says. The cogs were in such high demand that one even sold for $265 on eBay. The original “Gears of War” sold 4.7 million units. 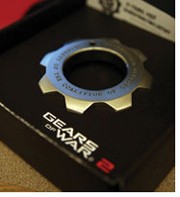